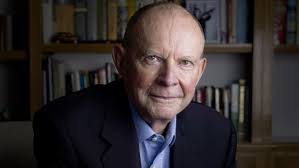 He reportedly died at his home in South Africa on Saturday after a decades-long career in writing, his office said.He was 88.

With 49 titles under his belt, Smith became a household name, his swashbuckling adventure stories taking readers from tropical islands to the jungles of Africa and even Ancient Egypt and World War II.

“Global bestselling author Wilbur Smith died unexpectedly this afternoon at his Cape Town home after a morning of reading and writing with his wife Niso by his side,” said a statement released on the Wilbur Smith Books website as well as by his publishers Bonnier Books UK.

“The undisputed and inimitable master of adventure writing, Wilbur Smith’s novels have gripped readers for over half a century, selling over 140 million copies worldwide in more than thirty languages.”

The statements did not reveal the cause of death.

His 1964 debut novel “When the Lion Feeds”, the tale of a young man growing up on a South African cattle ranch, became an instant bestseller and led to 15 sequels, tracing an ambitious family’s fortunes for more than 200 years.

Born in Zambia in 1933 to a British family, he was also a big game hunter, having grown up experiencing the forest, hills and savannah of Africa on his parents’ ranch.He also held a pilot’s licence and was a scuba diver.As a conservationist, he managed his own game reserve and owned a tropical island in the Seychelles.

He credited his mother with teaching him to love nature and reading, while his father — a strict disciplinarian — gave him a rifle at the age of eight, the start of what he acknowledged was a lifelong love affair with firearms and hunting.

He contracted cerebral malaria when he was just one-year-and-half — an ailment so serious there were fears he would be brain damaged if he survived.

“It probably helped me because I think you have to be slightly crazy to try to earn a living from writing,” he later reflected.

His bestselling “Courtney Series” was the longest-running in publishing history, spanning generations and three centuries, “through critical periods from the dawn of colonial Africa to the American Civil War, and to the apartheid era in South Africa”, said his publisher.

But it was with Taita, the hero of his “Egyptian Series”, that Wilbur “most strongly identified, and River God remains one of his best-loved novels to this day”, it added.

Singer, Buju reveals why he didn’t renew his contract with Burna boy