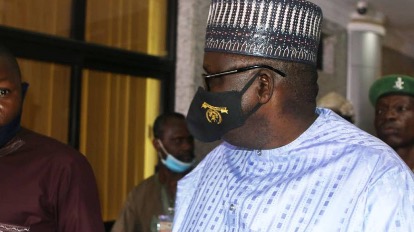 According to report reaching oyogist.com, Former Chairman of the defunct Presidential Task Force on Pension Reforms, Abdulrasheed Maina has been sentenced to a cumulative of 61 years imprisonment by the federal high court in Abuja.

Maina was found guilty of money laundering involving inducing staff of Fidelity Bank to open bank accounts for him without conducting the requisite due diligence.

The sentence will, however, run concurrently to make him spend only 8 years in jail.

Justice Abang Okon who sentenced him ordered that his jail term shall commence from 2019 when he was remanded in prison custody.

Apart from that, the Judge ordered that over N3bn cash in his numerous bank account be forfeited to the federal government alongside his three cosh house’s in Abuja.

Maina is also to forfeit all his bulletproof jeeps, BMW cars among others.

The court also found Maina guilty of concealing his true identity as a signatory to accounts opened in UBA and Fidelity bank by using the identity of his family members without their knowledge.

These accounts had cash deposits of N300 million, N500 million and 1.5 billion respectively

The court held that Maina stole monies meant for Pensioners as he could not prove where he got same from.

Justice Abang also held that through Maina’s service as a civil servant his salary and emoluments could not have amounted to the monies in these accounts.