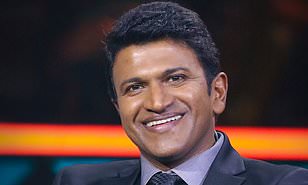 Oyogist has learned that Bollywood star Actor Puneeth Rajkumar, 46, died of a heart attack in Bengaluru, India, on Friday.

Puneeth reportedly developed chest pains during a gym workout at 11am and later died in hospital.

The Bollywood star is survived by wife Ashwini Revanth and two teenage daughters.

Dr. Ranganath Nayak, a cardiologist while confirming Puneeth’s demise, said in a statement that Rajkumar was unresponsive and his heart had ceased beating when he arrived.

“Mr Puneeth Rajkumar was an extremely fit 46-year-old gentleman. This morning, after his routine exercise, he complained of chest pain and was taken to his family doctor where he was diagnosed with an acute heart attack and he was immediately referred to our hospital for further management. ‘

‘On arrival at our hospital, Mr. Puneeth Rajkumar was non-responsive and his heart had stopped – this is called Cardiac Asystole,the doctor said Futher.