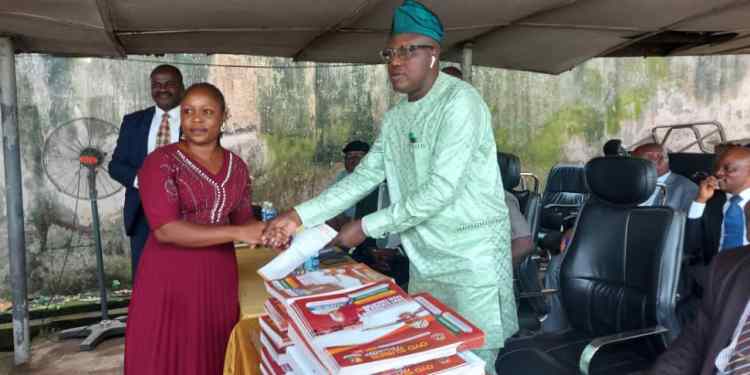 According to report reaching oyogist.com, Oyo State Government on Wednesday distributed over 16,500 promotion letters to primary school teachers across the 33 local government areas of the state.

Speaking at the symbolic presentation of the promotion letters to 66 representatives of the teachers, the Executive Chairman, Oyo State Universal Basic Education Board (SUBEB), Dr. Nureni Adeniran, said the letters were for the arrears of the 2017- 2020 promotion exercise.

Adeniran said the administration of Governor Seyi Makinde is passionate about the welfare of workers, adding that the teachers will never be denied their entitlements.

He said:” The important thing is that the governor of the state, Engr. Seyi Makinde is so passionate about workers’ welfare. These are arrears of promotion that were supposed to have been given even before we came on board. The governor was magnanimous enough to say look, these people were due for promotion, let us give them.

“The governor is a wonderful person when it comes to workers’ welfare and what belongs to the people of the state. We may not have fulfill everything we want to do but we have certainly left where we were before.

“Whatever the administration of Governor Seyi Makinde says it will do, it will surely do it; it is a talk and do administration and you are seeing that here today.”

The SUBEB chairman, who acknowledged that there is a shortage of teachers in primary schools in the state, said recruitment process into the primary schools will soon commence.

“We are working on getting necessary approval for recruitment and it will come to limelight very soon,” he said.

“We expect that you will take the full teaching of our students seriously in such a manner that we will see the impact on the learning outcome from the students you are teaching. “We want you to be more committed, punctual, and support the government in terms of giving dividends of democracy to people.

“We want a situation whereby the students that we will be turning out from Oyo State public primary schools will be able to compete with their colleagues in any part of the world. This is the challenge we are throwing back at you and we believe by virtue of what the governor has done, you will put in your best,” the SUBEB boss added.