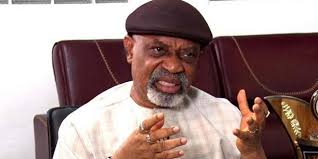 Oyogist.com has learned that the Federal Government has promised to commence the disbursement of the N30bn revitalisation funds to public universities soon.

The Minister of Labour and Employment, Dr Chris Ngige, disclosed this on Thursday in his office after a marathon conciliation meeting between the government and the Academic Staff Union of Universities.

The meeting was held by the minister to evaluate the level of implementation of the Memorandum of Understanding signed by both parties in December 2020 and the resolutions of the follow-up meeting held on August 2 this year.

Briefing journalists after the meeting, Ngige said they held fruitful deliberations, stressing that the six issues on the agenda were satisfactorily addressed.

He stressed that the government was not dragging its feet on anything that would make the university system good, adding that they were desirous that public universities should be fit and proper places for learning and research.

On the issue of revitalisation funds for public universities, the minister said the meeting received an update from the National Universities Commission and the Federal Ministry of Education and they were happy that the assignment given to them had been done satisfactorily.

He added, “A monitoring committee has also been sent up by the NUC. We are happy about that and expect the disbursement of the revitilisation funds to commence very soon.”