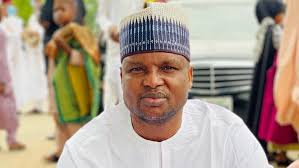 Oyogist has learned that the trial of Embattled police commissioner, Abba Kyari alongistm six other defendants would last for six days in the United States.

The other defendants which prosecutors say are outside the U.S. and “at large” are Mr Kyari, Abdulrahman Juma, and Kelly Chibuzo Vincent.

Prosecutors along with the three available defendants filed an application for the postponement of the trial from October 2021 to 17 May, 2022.

The case which was read at the U.S. District Court of Central California, highlighted that six days would be required to conclude the three defendants’ trial.
It read; “The parties estimate that the trial in this matter will last approximately 6 days.”
Abba KyariUSA
Share
0
FacebookTwitterPinterestLinkedinRedditWhatsappTelegramViberEmail

#Bbnaija: Queen has been evicted from BBnaija season 6