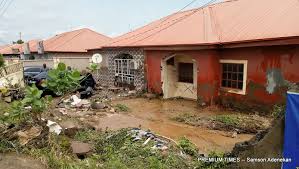 Oyogist has learned that four people have been confirmed dead while several others went missing, as flood waters washed away cars and houses of people in Abuja Trademoore estate.

Residents were seen lamenting the losses as they tried to salvage what they could from the ruins left by the flood.

A police station in the area was also taken over by the flood.

Several properties worth millions of naira were destroyed by the flood.

A resident while speaking with newsmen said further:
“many people died; four bodies have already been recovered, some people say more than that died. Some people are still missing.