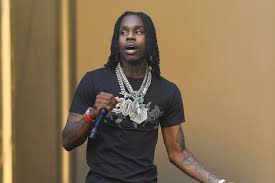 Oyogist has learned that American rapper, Polo G, born Taurus Bartlett, was arrested in the downtown area of Los Angeles on a charge of carrying a concealed weapon, which is considered a felony.

According to sources, 22-year-old polo was a passenger in a car that was pulled over and later searched.

The owner of the weapon is yet to be known as at the time of filing this report.