Filmmaker, Shona Ferguson, has passed away from Covid-19 complications 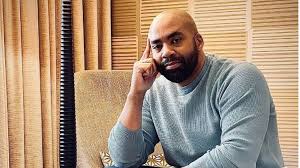 Oyogist.com has learned that Actor and filmmaker, Shona Ferguson, has reportedly passed away from Covid-19 complications.

He died early morning of Friday, 30th July at the age of 47.

The news of his death were confirmed in a joint statement issued by Ferguson Films and Ferguson Foundation.

Read the statement below;

“It is with great sadness that we confirm the passing of Mr Shona Ferguson.

“He passed away at noon today. Mr Ferguson’s untimely passing was due to Covid-19 related complications, and not a heart operation as reported in the media.

We ask that you give the family time to process this painful loss, and respect their space during this time. More details will be shared in future”

Shona is married to actress and television mogul Connie Ferguson and together they produced a number of hit DStv shows including Rockville, The Queen and The Throne; they also supervised the first season of The River, and Shona produced Netflix hit, Kings of Joburg.

South Africa has taken to social media to share their tributes and condolences to him and his family.