Copyright 2021 - All Right Reserved
Home People “Nnamdi Kanu Is Not A Murderer, the north is in Trouble – Father Mbaka says
People

“Nnamdi Kanu Is Not A Murderer, the north is in Trouble – Father Mbaka says 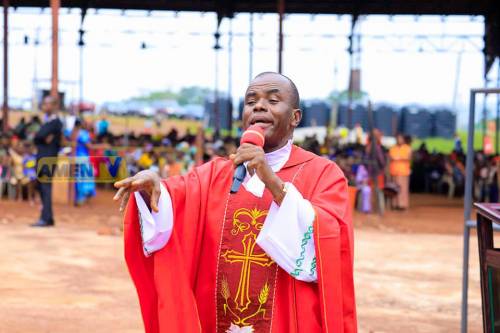 Oyogist has learned that the Spiritual Director of Adoration Ministries, Enugu, Fr Ejike Mbaka, has once again reacted to Nnamdi Kanu’s arrest and detention.

Mbaka in his recent briefing says the arrest of Kanu will not stop insecurity in the country.

The cleric defended Kanu’s agitation for Biafra, saying if things were working well in Nigeria, “Kanu” would not be an issue for the government.

He said, “Since you arrested him (Kanu), we have lost many lives. So, of what use is his arrest? After he was arrested, the kidnapping didn’t stop in the north; many students were kidnapped in Kaduna last week. Where were our security agencies? Why can’t they use the same temerity to arrest all those people doing this thing (killings)? Arresting Kanu will not solve the problem.

“Mbaka blamed rising insecurity in the country on politicians who pay huge sums of money to buy arms for political thugs to manipulate elections.

He said further, “Most of the politicians will buy ammunition and give it to millions of youth, and after the elections, no one collects the ammunition back. There is “herdsmenism,” people have abandoned the villages, and there are no jobs. Peoples’ farms are ravaged and they are kidnapped and killed. His arrest aggravates the problem.

“Has anybody seen Kanu kill anyone? Kanu is not a murderer. Have you caught him with guns? Why arrest someone who has never kidnapped anyone? Our land must yield an increase. Kanu is not herdsmen, kidnappers, or bandits, or Boko Haram. He does not carry ammunition and he is not even an unknown gunman. My job is to say what the spirit asked me to say.

“If you use the same aggression you deployed to arrest Kanu to address terrorism, things will change. It would help if you used the same temerity to address poverty, herdsmenism, injustice, corruption, and unhealthy tribalism. I am for truth and justice.

“I cannot support terrorism. There is agitation everywhere. All the men of God are agitating silently. The police and the army are agitating. Do you blame them? If they talk, they will be killed. In the mosque, there is agitation. You don’t arrest the agitation. You arrest the cause of it. People are hungry and angry. Millions are idle and an idle hand is the devil’s workshop.

“If Nigeria is doing very well, will Kanu emerge? I am for justice, equity and fair play. Look at what is happening in the North, the north is finished.”