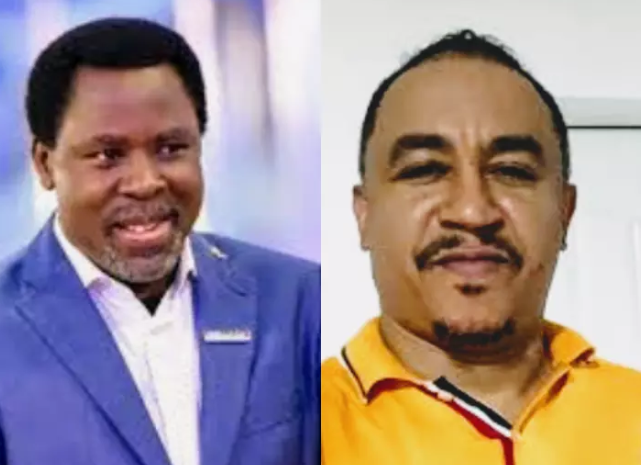 Daddy Freeze, Leader of the Free The Sheeple Movement, has expressed his disappointment in the General Overseers of Nigerian Churches for not attending the funeral of the founder of the Synagogue Church of All Nations SCOAN, Late Prophet T.B. Joshua, Oyogist.com reports.

Prophet T.B Joshua who died on June , was buried on Friday, July 9. It has been observed that none of the notable Men of God were in attendance of the burial, the only notable clergyman who attended his funeral was the chairman of the Christian Association of Nigeria CAN, Lagos state chapter, Rt. Rev. S.T.V Adegbite.

Daddy Freeze in a video on his Instagram page has expressed his disappointment at the older generations of pastors who did not identify with the deceased prophet even in death.

He mentioned that no matter what may have transpired between them when T.B Joshua was alive, they should have had a forgiving heart and attended his funeral.

”Prophet T.B Joshua has been laid to rest. May his soul rest in peace. I worry with the turnout of Christians to this man’s funeral. I worry. If we truly are Christians, every church should have sent a delegation.I must say I am disappointed whether you like to admit it or not. I am disappointed”, he stated.

He further defended himself for not attending as he claimed he wasn’t old enough to attend the burial as the Prophet is not his mate.

‘I am not old enough to attend T.B Joshua’s funeral. T.B Joshua is my father’s mate’, he said.