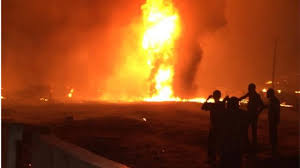 Information gathered that the incident occurred on Saturday evening when the children were playing.

The command has also deployed personnel and some experts to the area to know the actual cause of the unfortunate incident. We will keep you posted,” he said.

Though the cause of the incident hasn’t been discovered, it was learnt that one of the victims lost two of his hands during the incident.