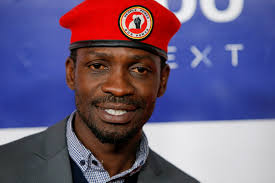 Oyogist.com has learnt that Ugandann main opposition leader, Bobi Wine is currently under police detention in Kampala for staging a protest.

‘Bobi Wine arrested as he led MPs and other leaders in a peaceful protest against the abduction, torture and murder of his supporters,” an official statement on Twitter said on Monday morning.

“The protest was taking place at City Square, Kampala.”

‘We May Go On Strike Again’ -ASUU Warns