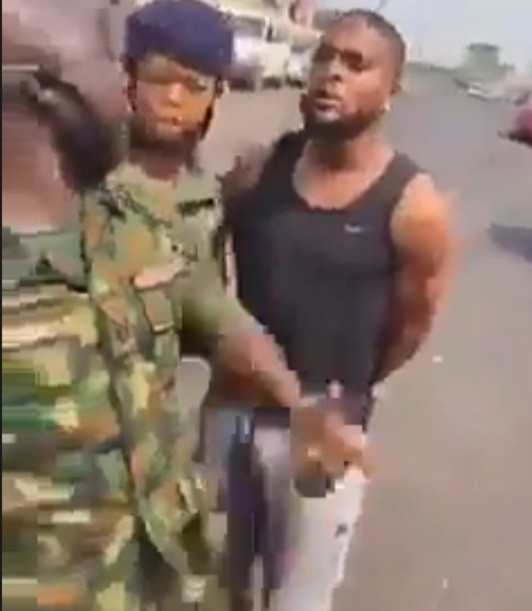 According to report reaching oyogist.com, a Nigerian born footballer who plays for Maccabi Tel Aviv, Chikelu Ofoedu, has reportedly gone viral after a video of him surfaced online depicting his confrontation with a Nigerian soldier who was alleged to have slapped him.

The soldier identified as Nasiru, had followed a one-way drive which led to a block from Chikelu’s car but claiming his might, the soldier slapped the footballer who felt it was wrong for the military man to slap him since he was driving without going against the law.

The soldier who refused to admit his error, could be seen in the video wielding a cutlass and threatening to deal with the footballer.

A friend of Chikelu could also be seen in the video confronting and asking the soldier why he slapped his friend but the soldier threatened to slap him also too.

Efforts were also made by the police officers who tried to calm the situation which had gotten tensed as people from the background were heard telling the soldier that he had no right to slap the the Chikelu and he should apologize for his action.

Chikelu, who wasn’t happy about the action of the soldier towards him refused to drive off his car saying he was sad and he couldn’t drive while being sad.