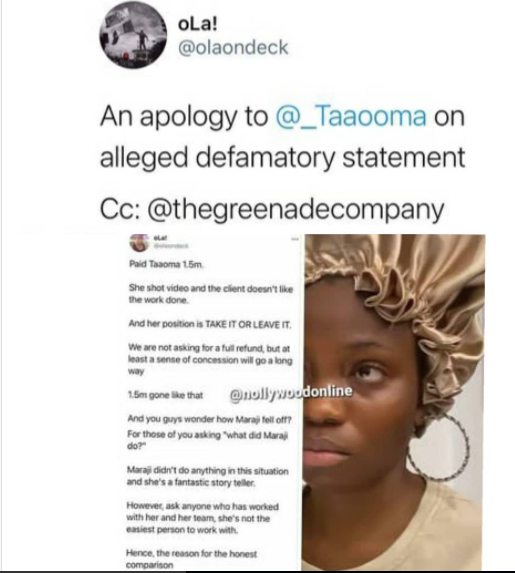 A Nigerian who accused popular Instagram comedian, Taaoma of collecting N1.5million for a job not properly done has retracted his statement.

In a new tweet, the Twitter user apologized by sharing a press release where he made known publicly that he never had any business transactions with the sensational Instagram comedian.

In a post that went viral on social media few days ago, the filmmaker accused the skit maker of collecting a sum of N1.5million from him to try and do a job, which she did not deliver accordingly.

In a new tweet, the filmmaker identified as Ola Owolabi apologised by sharing a press release where he made known publicly that he never had any business transactions with the sensational Instagram comedian.

Paid Taaoma 1.5m. She shot video and therefore the client doesn’t just like the work done. And her position is TAKE IT OR LEAVE IT. We aren’t posing for a full refund, but a minimum of a way of concession will go a long way. 1.5m gone like that. And you guys wonder how Maraji fell off? For those of you asking “what did Maraji do?” Maraji didn’t do anything during this situation and she’s an incredible story teller.”

However, ask anyone who has worked together with her and her team, she’s not the simplest person to work with. Hence, the rationale for the honest comparison.”

From what I even have experienced since the said statement, I even have now realised that I didn’t consider all the ramifications before making such statement.

The statement was pulled down from my Twitter handle soon . Please note that I didn’t intend to bring @taaooma’s reputation into any sort of disrepute.

I sincerely apologise and regret any inconveniences this might have caused @taaooma. Thank you.