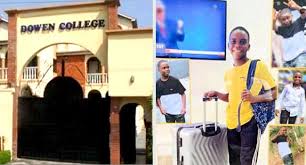 According to reports reaching Oyogist.com, the family of the late Dowen College Student, Sylvester Oromoni (Jnr.), has asked the coroner inquiring into his controversial death to adjourn proceedings indefinitely.

A counsel from the Law Firm of Falana & Falana, Taiwo Olawanle, made the application on the grounds that other parties to the proceedings have not filed their witness depositions.

Some other lawyers in the proceedings said it was an attempt to stop the process as the truth was starting to come out, according to Channels Television.

The coroner, Magistrate Mikhail Kadiri, has held that the application is vexatious especially as the court has ruled on the matter and ordered all parties to file their witness deposition by Tuesday, February 1.

The court also ordered that all pending witnesses should be present in court at the next sitting on Monday, January 31.

Channels Television gathered that the father of the deceased, Sylvester Oromoni Snr and his sister were due to testify before the coroner on Friday but failed to show up.

The court has also notified all parties that subsequent sittings will hold at the Lagos High Court.

Meanwhile, the coroner has dismissed the application of the Ijaw Youth Council, Lagos Chapter seeking to be joined as interested parties in the proceedings.

The court held that their interest is subsumed in that of the family of the deceased who are already represented by counsel at the proceedings.