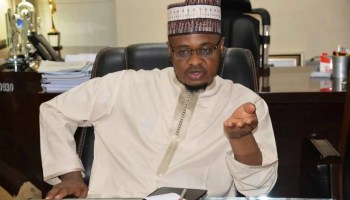 According to report reaching oyogist.com, the Nigerian Government, through the Ministry of Communications and Digital Economy, has unveiled Nigerian Postal Service Debit Card, an Agency Banking platform.

This is coming as the minister also launched 27 courier service vehicles to make NIPOST and its partners compete favorably in the industry.

Pantami said it is impossible for any economy to be transformed without digitization, adding that a digitized economy will improve ease of doing business, improve transparency and fight corruption.

Pantami said the debit card and the other newly launched services would help the agency key into e-governance and a sustainable digital economy.

“First of all we’re in the process of NIPOST transformation and transformation cannot be possible without digitalisation,” the Minister told journalists.

“There’s a core mandate of NIPOST but what we are doing today is to ensure NIPOST is digitalized so that they can deliver services by implementing their core mandate which has been established by law,” he said.

“Secondly. We’re not agitating NIPOST debit card launched today must replace our AIT Cards, but rather it’s another alternative of banking, of financial transactions, of e-Naira wallet, for example, paying your bills and many more. Most importantly, these products will be used on and offline.

“So it is complimenting and also providing other alternatives, particularly for people who are at the unserved and underserved areas. We have many of them. NIPOST exists in so many places where all other banks do not exist in Nigeria.”

Speaking earlier, the Post Master General (PMG)/CEO, NIPOST, Dr. Ismail Adewusi, said two subsidiary companies were created out of the agency in the last two years, namely, the NIPOST Property and Workshop Ltd and the Transport and Logistics Ltd.

According to him, “We equally created the Stamp Denotation and Authentication Department, following the amendment of the Finance Act 2020 which restores the mandate of NIPOST to produce adhesive postage stamps for the purposes of authenticating duties or fees.’’

“I was afraid, depressed, and confused when I started my journey as a single mum”- Iyabo Ojo

How To Avoid Ponzi Schemes in Nigeria (A Thread)

What Will Happen if PDP Loses 2023 Presidential Election – Wike