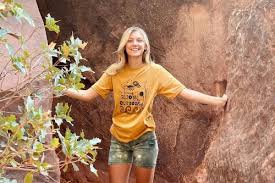 Oyogist has learned that police reports confirmed that the body found in Grand Teton National Park matches with the description of 22 Year old influencer, Gabby Petito.

Petito was declared missing by her mum On Saturday 11

September 2021, after she went on a road trip with her boyfriend since July.

Petito who hails from Blue Point in Suffolk County, New York is an Instagram influencer and a van life Blogger.

She reportedly moved to North Port, Florida two years ago with her boyfriend, Brian Laundrie, as the duo have been dating since March 2019, but got engaged in July.

According to police reports, the couple got into a physical altercation on 12 August – a week before Petitio was last seen.

Upon citing Petito, she began “crying uncontrollably” and told officers she had been struggling with her mental health.

According to the police report: “[Petito] didn’t want to be separated from the male, and began slapping him.

“He grabbed her face and pushed her back as she pressed upon him and the van, he tried to lock her out and succeeded except the driver’s door.

“She opened that and forced her way over him and into the vehicle before it drove off.”Police officer Daniel Scott Robbins determined:

“After evaluating the totality of the circumstances, I do not believe the situation escalated to the level of domestic assault as much of that as a mental health crisis.”

Meanwhile, her boyfriend, Laundrie has refused to speak to authorities about the disappearance of his girlfriend and has hired an attorney, Oyogist reports.