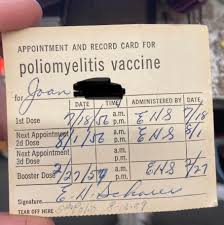 Oyogist has learned that a polio vaccine record slip from 1956 has been discovered in a thrift store.

According to a twitter user, @Mildlyintresting, the vaccine card was found in the thrift store where he currently works.

The vaccine card was labelled with several inscriptions, including the doses administered alongside the booster dose.

Several twitter users while reacting to the vaccine discovery wondered if polio was a crisis back then, due to the huge amount of doses administered.