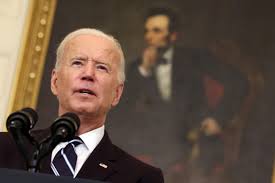 Oyogist has learned that France has accused US President Joe Biden of suspending a lucrative defence deal that it had signed with Australia.

The deal which is titled ” Aukus, is alleged to be an attempt to counter China, though the three leaders did not mention Beijing explicitly in their remarks.

Aukus means a multibillion-dollar contract Australia had signed in 2016 to buy French diesel-powered submarines will now be scrapped.

France minister, Le Drian said he was “angry and bitter” over the move, slamming it as a breach of trust

.
“This brutal, unilateral and unpredictable decision reminds me a lot of what Mr Trump used to do,” he told Sources. “This isn’t done between allies.”
FranceJoe Biden
Share
0
FacebookTwitterPinterestLinkedinRedditWhatsappTelegramViberEmail