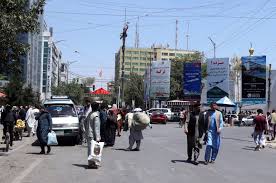 Oyogist has learned that Thousands of Afghans and foreign nationals have dispersed to the tarmac at Kabul airport seeking a place on a flight out of the country, despite chaotic scenes that unfolded as the Taliban took control of the city.

After the Taliban mounted into the presidential palace and the elected president having fled the country, the only possible route to the Hamid Karzai airport, was possible only through Taliban checkpoints.

Meanwhile, the US, UK, Germany, Canada and a host of other coalition nations are all seeking to evacuate their nationals from the country.

This morning, there were reports US troops had fired into the air to disperse surging crowds.

Several US Embassy staff are being helicoptered to the military side of the airport, which has been secured by US soldiers..