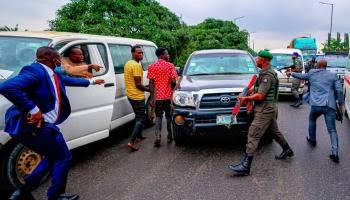 According to reports reaching Oyogist com, the Four suspected traffic robbers who were arrested by the Lagos State Governor, Mr Babajide Sanwo-Olu, while trying to attack a motorist, were arraigned before a Lagos Magistrates’ Court sitting at Ebute-Metta.

They are standing trial on a three-count charge bordering on conspiracy, breach of public peace and possession of offensive weapons, preferred against them by the Police.

The defendants who specialises in attacking motorists and road users, were docked before Magistrate Mrs Adedayo Tella.

The prosecutor, Inspector Kehinde Olatunde, told the court that the suspected traffic robbers conspired amongst themselves to commit the alleged offence.

The defendants conducted themselves disorderly by bearing and wandering offensive weapons, on the highway in circumstances that is illegal.”
“The defendants used offensive weapons including two cutlasses and in an attempt to rob a motorist around Ojota in-bound Alausa, they were arrested by the executive governor of Lagos State, Mr Babajide Sanwo-Olu”, he said.

However, the defendants pleaded not guilty to the charge against them.

Consequently, Magistrate Tella, granted the defendants bail in the sum of N100,000 each, with two sureties each in like sum.

The case was adjourned till August 6, for trial.

Why do women like other women’s property?” Uriel Oputa asks