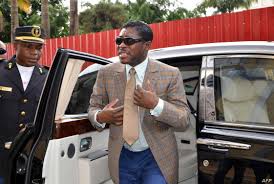 Oyogist has learned that Equatorial Guinea will shut down its diplomatic mission in London, following the “Illegal” sanctions imposed on President Obiang’s son.

Mangue, the son of Equatorial Guinea president was accused of misappropriating millions of dollars.
“The first decision that the Malabo executive has taken is the total closure of our diplomatic headquarters in London,” Foreign Minister Esono said on state television.

“Equatorial Guinea will not accept interference in the internal affairs of the country, which violates the principle of international law,” Esono said.

Britain sanctioned Mangue, who is also the vice president of the tiny Gulf of Guinea nation, for misappropriating millions of dollars which London said were spent on luxury mansions, private jets and a $275,000 glove worn by Michael Jackson

I’m a bold lady with massive dreams, Linda Osifo eulogizes herself as she clocks 30 today(photos)