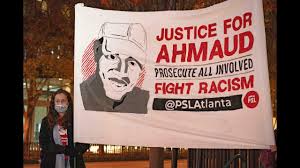 Three Georgia men were Sentenced to life imprisonment over the murder of Ahmaud Arbery, Oyogist reports.

Travis McMichael and his father Gregory were sentenced by a judge in Georgia after they were found guilty of killing Ahmaud Arbery, a Black man running through their mostly white neighborhood in the southern U.S. state.

Judge Timothy Walmsley also gave a life sentence to their neighbor William “Roddie” Bryan but ruled that he could seek parole after 30 years in prison, the minimum sentence allowed for murder under Georgia law.

In November 2021, a jury found Gregory McMichael, 66, his son Travis McMichael, 35, and their neighbor Bryan, 52, guilty of murder, aggravated assault, false imprisonment and criminal intent to commit a felony.

“Mom said I still need to get a degree”- Singer, Rema gains admission into UNILAG