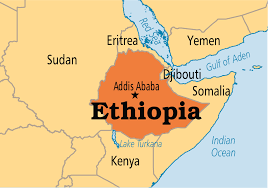 Oyogist has learned that an air strike in Tigray region, Ethiopia left not less than 56 people dead while 30, got Injured including children.

The attack had occurred yesterday at a camp for displaced people, local authorities Confirmed to oyogist.

Those who were injured during the air strike were brought to General Hospital for treatment.

The government has previously denied targeting civilians in the 14-month conflict with rebellious Tigrayan forces.