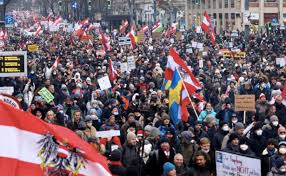 Oyogist.com has learned that thousands of people took to the streets of Austria’s capital on Saturday, January 15, to protest against government plans to introduce mandatory COVID-19 vaccinations for all next month.

“The government must go!” crowds chanted at one rally in central Vienna in what has become a routine Saturday event.

Parliament is scheduled to vote next week on the issue, which has polarized the country as coronavirus cases surge.

In November, the government announced a fourth national lockdown and said it would make vaccinations compulsory for all Austrians, the first European Union country to do so.

A poll for Profil magazine found 51% of those surveyed oppose making jabs mandatory from February, of whom 34% were against compulsory vaccination in general and 17% wanted to wait.

The poll showed Chancellor Karl Nehammer’s conservatives and the opposition Social Democrats in a dead heat for first place at 25%, followed by the right-wing Freedom Party, a strident critic of government policy, at 20%.

The Greens, junior partner in the coalition, were even with the liberal Neos on 11%, while the vaccine-sceptical MFG party scored 6%.

Health authorities have reported more than 1.4 million infections and nearly 14,000 deaths from COVID-19 since the pandemic broke out in early 2020.