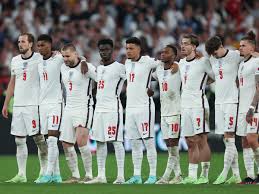 Oyogist has learned that a forklift driver has been jailed for racially abusing three England football players in a live video stream on Facebook.

Jonathon Best, 52, used the social networking site to rant about black players who missed penalties during the Euro 2020 final.

Rashford, Jordan Sancho, and Bukayo Saka suffered racist abuse on the internet over their failure to convert the penalty kick as Italy won 3-2 in a penalty shoot-out.

The final game had initially ended in a 1-1 draw after extra time.

Facebook took the clip down three days after Best posted the video.

Best was sentenced to 10 weeks in prison at Willesden Magistrates’ Court after pleading guilty to sending the video.

When asked why he put out such racist comment online,Best allegedly responded: “It’s my profile, I can do what I want.”