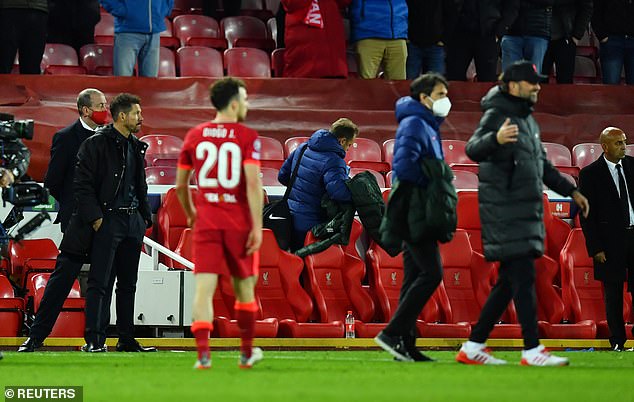 Oyogist has learned that Atletico Madrid Manager, Diego Simeone once again snubbed a respectful handshake from Jurgen Klopp after his side’s 2-0 defeat to Liverpool.

Simeone had headed straight down the tunnel, refusing to shake kloop’s hand.

The Atletico boss had claimed that the gesture by kloop was ‘fake’ because two managers are in ‘different emotional minds’ after a game.

He had warned in the build up to the second game that he would snub the handshake once again, saying he was aware it was common in England but insisted he ‘did not like’ it, and at full time he disppeared while Klopp celebrated the victory with his players.

Klopp, while reacting, said he held nothing against Simeone after the game, as he had learnt his lesson.’

“After the game in Madrid, I wasn’t happy with my reaction either,’ he said after Liverpool’s crucial win at Anfield.

“Making a mistake is not a problem… learning from it is the target.’I learn… if he doesn’t want to have a handshake, that’s no problem. I respect pretty much everything in life. But I didn’t know in that moment – so that’s why I did what I did. And now, everything’s calm and how it should be.’ kloop said.

The reds are now at the top of the group table, and might claim the top spot in the league.