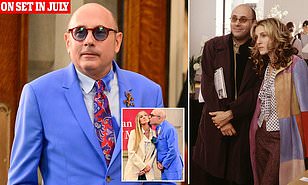 Oyogist has learned that Popular Hollywood actor, Willie Garson, who famously portrayed Stanford Blatch in HBO’s Sex And The City, has passed away at the age of 57.

He posted a tribute to his late father to deliver the news, writing: ‘I will always love you, but I think it’s time for you to go on an adventure of your own, you’ll always be with me’

A spokesperson for HBO also confirmed that The actor had ‘been battling cancer’ prior to his death, but it has not been confirmed as the cause.

Willie was last captured performing beside series star Sarah Jessica Parker during a shoot day in NYC on July 24.