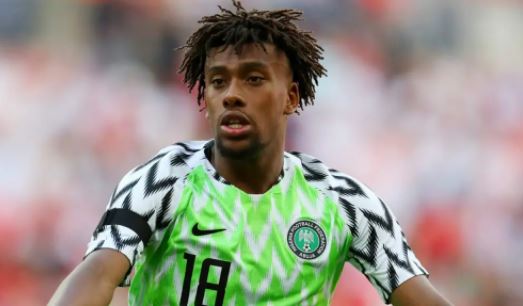 Alex Iwobi, the Super Eagles star, has finally broken his silence on Nigeria’s elimination from the ongoing 2021 Africa Cup of Nations, AFCON, in Cameroon.

Nigeria was eliminated from the 2021 AFCON Round of 16 after losing 1-0 to Tunisia on Sunday night.

Youssef Msakni’s second-half strike ensured Tunisia defeated Nigeria and qualified for the AFCON quarter-finals.Iwobi was shown a red card during the match after receiving two yellow cards while Goalkeeper, Maduka Okoye was guilty of letting Msakni’s drive get past him.

However, Umar Sadiq had a glorious chance late to equalize during the encounter, but the Almerian striker dragged his shot wide with only Tunisia goalkeeper, Ben Said to beat.

Reacting, Iwobi, took to his Instagram account on Tuesday to promise Super Eagles fans that the team would bounce back from the defeat.

He wrote: “Moments of joy can quickly turn into pain and anguish. As much as it’s a part of football, we came for more.

“Our fans who shared these moments with us both in Cameroon and across the world deserved more!

“The beauty of the game is the next moment of jubilation is never too far around the corner.

“We will be back to fight for our nation, stronger. We owe it to you, and I owe it to myself. Thank you for all the words of support & encouragement – it doesn’t go unnoticed.”