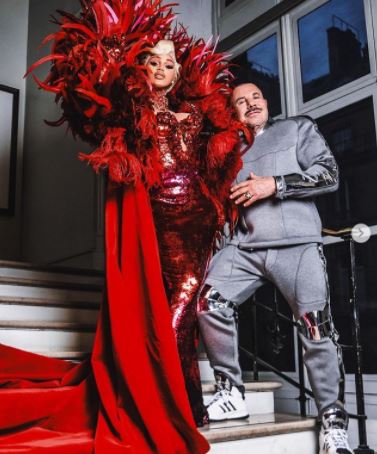 Oyogist.com has learned that French fashion designer Manfred Thierry Mugler, whose dramatic designs were worn by celebrities like Madonna, Lady Gaga and Cardi B, has died aged 73.

“May his soul Rest In Peace,” it said in a post that was all black with no image.

Mugler, who launched his brand in 1973, became known for his architectural style, defined by broad shoulders and a tiny waist.
The use of plastic-like futuristic fabric in his sculpted clothing became a trademark.

He defined haute couture over several decades, dressing up Diana Ross and Beyonce at galas, on red carpets and runways.

His designs were not shy about being outlandish, at times resembling robotic suits with protruding cone shapes.

Mugler also had a popular perfume line, which he started in the 1990s.

Cardi B reacted to his death via Instagram, she wrote: “Mr. Mugler was one of the FIRST designers to take a major chance on me, allowing me to wear one of his ICONIC archive pieces for my Grammy red carpet look in 2019. Over the years me, him and Kollin created even more fashion moments but nothing tops being able to finally meet him in person last year in Paris at his museum exhibit.”

“It’s so crazy because I was second-guessing if I should go the whole time leading up to that trip. I had just given birth to my son like three weeks prior and wasn’t feeling 100% like myself but something in my spirit kept saying “GO.” Maybe God knew that if I didn’t go then I may have never had the opportunity to thank him for everything he did and the doors he opened for me. Mr. Mugler was still putting his foot on necks at 73 years old!!! A true inspiration for all of us.”