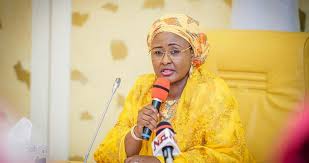 Aisha, wife of the President, Major General Muhammadu Buhari (retd.), has supported the call for capital punishment for the killer of five-year-old Hanifa Abubakar who was allegedly killed by her teacher.

The First Lady threw her weight behind the call for capital punishment when she shared a video of an Islamic cleric making the call on Sunday.

She wrote in Hausa that she supports the cleric’s judgement.

“We support the judgment of malam,” the President’s wife stated.In the video, the cleric, who spoke in Hausa, was heard saying that capital punishment should be meted out on the killer of Hanifa.

“He should be separated from this world the same way he separated this girl from the world and it should be done publicly,” the cleric said.

He further stated that capital punishment would serve as a deterrent to others who have the intention of carrying out such dastardly acts.

“He should be killed for all eyes to see so that tomorrow, nobody carries out such act,” the cleric added.