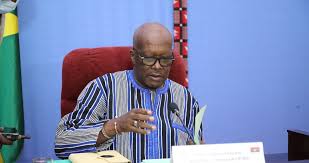 The news of his detention was confirmed by Several security sources,who stated that the detention of the president appeared to have occurred amid some violence.

The nation’s army had confirmed in a recent Announcement on Monday that it had “ousted President Roch Kabore, suspended the constitution, dissolved the government and the national assembly, and closed the borders’.

The announcement, signed by Lieutenant Colonel Paul-Henri Sandaogo Damiba said the coup had been carried out without violence and that those detained were at a secure location.

The statement was made in the name of a newly launched entity identified as “the Patriotic Movement for Safeguard and Restoration or MPSR, ( its French language acronym).