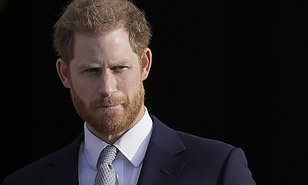 Oyogist has learned that the Duke of Sussex, Prince Andrew is currently seeking a Judicial Review over Home Office decision to remove his police protection when he visits Britain.

A legal representative Disclosed that The Duke first offered to pay personally for UK police protection for himself and his family in January of 2020 at Sandringham.

“That offer was dismissed. He remains willing to cover the cost of security, as not to impose on the British taxpayer.’But now a senior source has told this newspaper: ‘I’ve not seen anything in writing that suggests this is about whether or not he pays for it. It’s about whether or not the security is granted here that is the issue.

“Harry’s lawyers claim that privately hired bodyguards would be insufficient in the UK. But Government officials are understood to have been infuriated by the Royal’s legal action.

A security source said: ‘When Harry left The Firm the terms of his divorce were clear. Like other members of the public, he and his wife are not able to hire armed cops at will – no matter how much they offer to pay.’