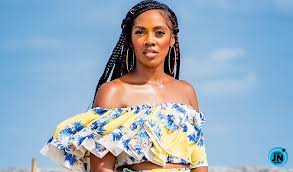 Oyogist has learned that Nigerians have expressed their Dissatisfaction after a federal university’s examination question paper Surfaced online.

As seen in the question, singer, Tiwa Savage was captured in a bad light.

The examination paper had belonged to the faculty of arts at the Federal University of Lafia as it featured the topic of the singer’s leaked tape that went viral in 2021.

Internet users heavily criticised the university for coming up with such an examination question and queried its significance to the students’ development.

Read the Question below;