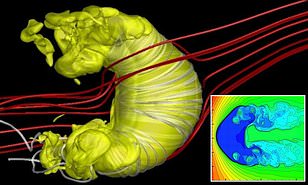 Oyogist has learned that a new study performed by researchers in Boston University has claimed that our solar system may be shaped like a CROISSANT.

The study also claimed that Hydrogen particles slamming into the solar system from the outside could be playing a crucial role in bending the shape of the protective bubble that surrounds the sun and its planets, a new study suggests.

This bubble, known as the heliosphere, shield objects in the solar system from powerful cosmic radiation emanating from supernovas, and other elements.

Rapper, Drake was part of a team of astrophysicists who carried out a study led by Boston University’s Merav Opher.

Data from three spacecraft that have travelled to the far reaches of the solar system found that it is more like a croissant.

Dowen College: Sylvester Oromoni’s Death Is A Slap On The Face Of The Education Sector – Sanwo-Olu’s Wife