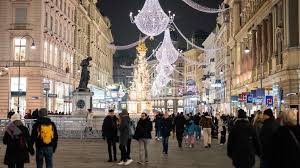 According to reports reaching Oyogist.com, Austrian government has ordered a nationwide lockdown for unvaccinated people in an effort to slow the spread of Covid-19 in the country.

Chancellor Alexander Schallenberg confirmed that millions of citizens would be placed into lockdown from today amid a worrying trend in infections.

The move, which will affect about two million people in the country of 8.9million, prohibits unvaccinated individuals from leaving their homes except for basic activities such as working, grocery shopping – or getting vaccinated.

It will not apply to children under the age of 12 because they cannot yet officially get vaccinated.

It comes after hundreds of Dutch protestors had a water cannon turned on them by police last night after they objected to the partial return of lockdown introduced by The Netherlands Prime Minister Mark Rutte.

Earlier before this hundreds of people descended upon the streets of Ballhausplatz in Vienna during an anti-vaccination rally.

Protesters held placards in their hands reading ‘no compulsory vaccination’ as they walked through the streets.

‘It’s our job as the government of Austria to protect the people.’Therefore we decided that starting Monday … there will be a lockdown for the unvaccinated.’

The lockdown will initially last for ten days and police have been asked to check people outside to make sure they are vaccinated, Mr Schallenberg said.

Austria has one of the lowest vaccination rates in western Europe, with only around 65 per cent of the total population fully vaccinated.

recent weeks, the country has faced a worrying trend in infections and reported 11,552 new cases on Sunday; a week ago there were 8,554 new infections.