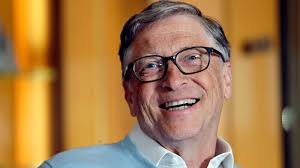 According to reports reaching Oyogist.com, Microsoft CEO, Bill Gates had invited a handful of his fellow billionaire friends, including Amazon’s Jeff Bezos to his birthday bash.

Gates, who is worth $136 billion, transported his 50 guests by helicopter from his $2million-a-week rental yacht ‘Lana’ to the Sea Me Beach club in Fethiye.

He invited Amazon founder Jeff Bezos, who is worth a whopping $195.9 billion – to celebrate the day with him and his friends.

Gates, whose birthday is October 28, reportedly entertained his guests with local seafood, sushi, pizza, and plenty of champagne.

The Microsoft founder had earlier announced his divorce to wife of 27 years Melinda Gates, with whom he shares three children.

Gates, 65, and his ex-wife, 56, shocked the world when they took to Twitter to break the news of their divorce back on May 4, READ HERE.

They tweeted that they ‘no longer believed we can grow together as a couple’ but they will still continue to work together at the Bill and Melinda Gates Foundation.