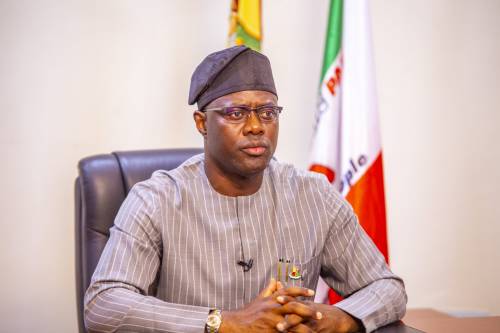 Few weeks ago, some PDP members in the state, including Ashipa, had accused Makinde of being behind the sacking of Abubakre Adeyemi, a footballer with state-owned club, Shooting Stars, also known as 3SC.

Adeyemi, according to sources is the son of a PDP chieftain in Oyo State, Alhaji Adebisi Abdulrasheed Adeyemi, aka Olopoeniyan, who is at loggerheads with Makinde.

The letter, reads in part, “We are solicitors to Engr. Seyi Makinde (herein referred to as our client) on whose instruction we write and our professional service retained by him. Sequel to the foregoing, we have been briefed with unequivocal instructions to enter into this correspondence.

“Our client is the current executive governor of Oyo State and the Crux of the Notice will be centred on a Facebook post published under your name by the public Facebook profile named ‘Ismaila Ashipa’ at the linked Facebook website online address https//:facebbook.com.asipa in line with the above set out agendum.

“Premised to established facts, we have been informed by our clients to express his shock and consternation with the fact that on 6th 2021, you published a libellous post on the well known social media website ‘Facebook’ under your profile name ‘Ashipa Ismaila’ with heading, ‘Vindictive GSM’.

“In the post, you falsely and with malicious intent wrote of and concerning our client inter alia as follows, “One of the skilful footballers who got 3SC promoted to the Premier Division recently, Mr. Abubakre Adeyemi defensive midfielder with jersey no 4 has been sacked by the order of his Excellency, Engr. Seyi Makinde, the Governor of Oyo State.

“The governor, therefore, demanded a public apology from Ashipa, and threatened to sue for N3 billion in damages if the apology is not tendered within seven days.

“We demand with an utmost insistence that these apologies, promises and retractions must be addressed directly (with prominence to our client and published in an at least three national newspapers.

This draft mentioned will be addressed and disbursed to orphanages of our client’s chosen all over Oyo State,” the letter further read. The letter gave the PDP leader seven days to react, else he will be sued.

BREAKING: I am happy to be back home – Tinubu