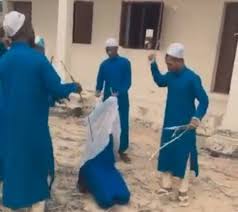 A video currently trending on social media showed the moment some Islamic students in Kwara State were asked to brutally flog their Colleagues for attending a birthday party.

pictures of the birthday celebration were shared online, However, their teacher saw the post and thought they drank alcohol.

A twitter user who shared the video captioned:“These Muslim brothers and sister went to celebrate one of their friend on his birthday, so they posted this picture and their Alfa saw it. He thought they drank alcohol, but they only had Yoghurt.”

Meanwhile, some Nigerians on Twitter have condemned the incident, asking the government to punish the perpetrators.Below are some reactions;

“I remember when I Dey go modrasa in Alfa yayah in ilorin that time.. I came late ,the next is to be beat me 20 stroke cuz I came late , I received 5 and the 6 one meet in me aweâ aswear Iâstand up and tell the Alfa if dem born you well beat me again, @BRYAN wrote.

@faruqfromdeep commented, “one time a self acclaimed alfa was flogging a boy so mercilessly, I intervened then he called for backup and the locals ran me out of the mosque, including the child’s mother. twas one of those locations I can’t pronounce in Ilorin, dumb barbaric folks”..