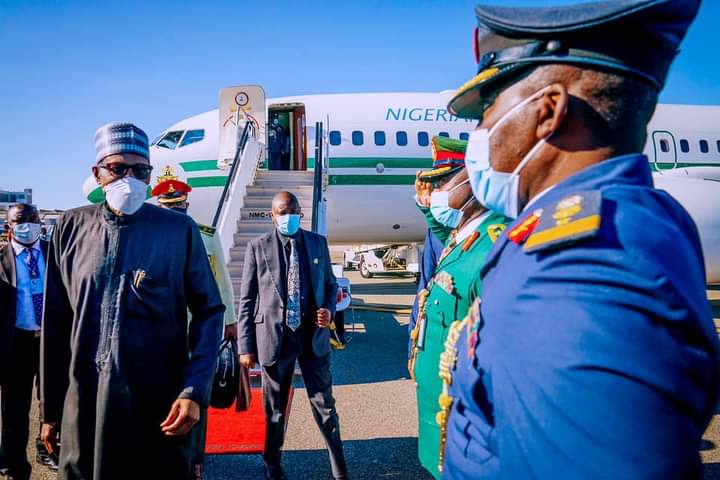 Oyogist.com has learned that President Muhammadu Buhari has arrived in New York for the high-level meetings of the 76th Session of the United Nations General Assembly.

It was gathered that Mr Buhari arrived at the JF Kennedy International Airport in New York at about 4 p.m. local time.

The president was received by the Minister of Foreign Affairs, Geoffrey Onyeama; Governor Kayode Fayemi of Ekiti State; the Minister of Industry, Trade and Investment, Niyi Adebayo and the Permanent Representative of Nigeria to the UN, Tijjani Muhammad-Bande.

Other Nigerian officials on the ground to welcome the president were Minister of State, Power, Goddy Jeddy-Agba; his environment counterpart, Sharon Ikeazor, Director-General of National Intelligence Agency, Ahmed Abubakar, and Nigeria’s Ambassador to the United States, Uzoma Emenike, among others.

Mr Buhari would be the second head of state to address the high-level session of the General Assembly on the fourth day of the General Debates at about 9 a.m. local time on Friday, September 24, when he would speak on the theme of the conference and other global issues.