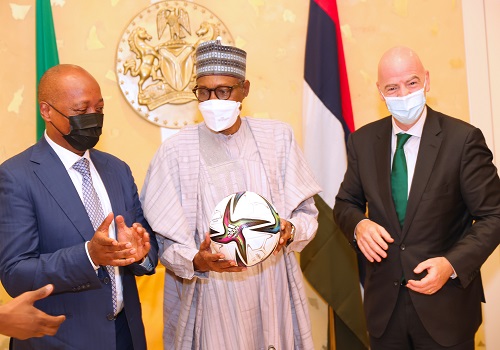 Oyogist has learned that the Nigerian President Muhammadu Buhari has yet again, declared his administration’s commitment to use football for the development of the girl-child.

Gianni Infantino and the president of Confederation of African Football (CAF) Patrice Motsepe, at State House, Abuja on Thursday.

‘‘Our National women’s football team, the Super Falcons are a force to reckon with both on the continent and internationally.‘‘Some of our women footballers such as Asisat Oshoala, who only recently became the first African to win the women’s European Champions League with her club Barcelona.

‘Rasheedat Ajibade, Rita Chikwelu, Onome Ebi, who is the only African to have played in five FIFA Women’s World Cup Finals, Desire Oparanozie and before them Perpetual Nkwocha, Mercy Akide-Udoh, Nkiru Okosieme and Ann Chiejiene are globally recognized stars,’’ he said.

President Buhari, therefore, urged the leadership of the world football governing body to consider Nigeria top on its plan for support and investment.

#BBNaija: Big Brother Orders Housemates To Mimic Each Other For A Whole Day