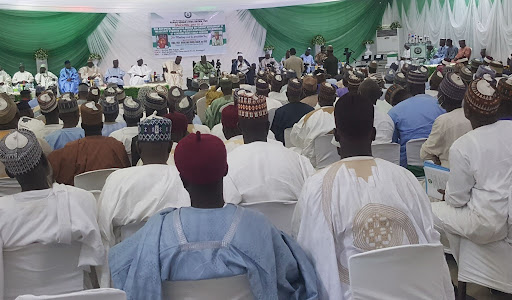 Oyogist has learned that various stakeholders in Borno State, Northeast Nigeria, said they’re ready to forgive and accept back at least 3,900 ‘repentant’ Boko Haram terrorists who Surrendered to the Nigerian military.

This was one of the resolutions reached at a town hall meeting held by the stakeholders in Maiduguri.

Recall several members of the Jamaatul Ahlil Sunnah liddawati wal Jihad (JAS) faction of the Boko Haram had surrendered themselves to the Nigerian troops following the death of their leader, Abubakar Shekau.

The stakeholders, who endorsed the government’s decision to accept the repentant terrorists, issued a 16-point communique detailing their position on the matter at the end of the meeting which lasted about five hours.

The 16-point communique In the 16-point communique signed by Kaka-Shehu Lawan, the Borno State Attorney General and Commissioner for Justice, “the meeting urged the federal and state government to “handle the issue of repentant Boko Haram insurgents with utmost care and within the instrumentality of the law.”

“The meeting stressed the need for proper profiling of the repentant Boko Haram insurgents to avoid hasty release of hardened elements to the larger society.”

“The meeting welcomed the recent massive surrender by the Boko Haram insurgents and urged those still in the bush to follow suit.”

“The meeting strongly advocated for the strengthening of the deradicalization mechanism of the Operation Save Corridor to involve parents of the surrendered Boko Haram members, Ulamas, traditional/community leaders and the media.”

“The meeting urged citizens to key into the educational opportunities created by the state government especially by enrolling their children and wards to schools as a countermeasure for indoctrination.”

“The Stakeholders reiterated the need for further support to all victims of the insurgency especially the women and children.”

“The meeting called on the Federal Government for the establishment of a world-class deradicalisation/rehabilitation centre in Borno State being the epicentre of the insurgency.”

“The meeting called for a true reconciliation amongst the affected people.”

“The meeting appreciated the support of the Federal government to the state but solicited for more funding from the Federal Government to the state especially in the areas of reconstruction, resettlement, reintegration, education and health as the meagre resources at the disposal of the State is not enough given the magnitude of the cost involved.”

“The meeting urged the military to sustain the ongoing offensive on the activities of ISWAP.”

“The meeting resolved to have periodic press briefing on the ongoing activities of the surrendered Boko Haram terrorists with a view of creating awareness amongst the members of the public.”

“All firearms and offensive weapons used by the insurgents be retrieved from them.”

“The meeting further resolved that the North East Development Commission as a matter of priority be involved in all aspects of rehabilitation and integration of surrendered Boko Haram into the mainstream society.