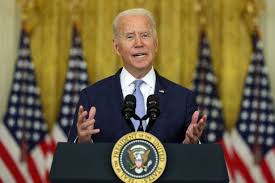 Oyogist has learned that US President, Joe Biden has promised to evacuate all Americans from led Afghanistan.

Biden also promised to rescue Afghan citizens who assisted the U.S. military over the last two decades, as the military begins operation to fly thousands of evacuees out of Kabul’s airport.

The president described the evacuation as “Dangerous”, but insisted on rescuing Afghan citizens.

He initially said the government will “do everything we can” to airlift at-risk Afghans, but he later clarified he’s committed to evacuating all Afghans who worked with the United States, calling their rescue “equally important, almost” to rescuing Americans.

Biden Further warned that sending troops further into the city could lead to “unintended consequences.”

The president disclosed that the Taliban has agreed to let Americans pass through its gauntlet of checkpoints and reach the Kabul airport, although the militant group has reportedly blocked many Afghans from entering, sometimes using violent force.