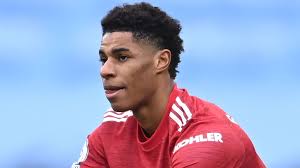 Oyogist has learned that Man United star player, Marcus Rashford has revealed that he will always feel indebted to Manchester United for the support shown by the English Premier League club towards him and his family.

Rashford stated this in a lengthy message on his social media pages as he Explained how he has learned that he needs to listen to his body.

He is currently under sidelinedue to a shoulder operation after being troubled by the problem for the second part of last season including during England’s Euro 2020 campaign.

The club had, meanwhile, gone ahead to issue a short statement on the surgery on Friday before Rashford himself vowed to come back stronger and that is both physically and mentally.

“When I was 11 years old, MU [United] helped me and my family out of a really difficult situation,” he wrote. “I will always feel indebted.“When the club needs me, I’ll be there. Any role I can play in helping my boyhood club, I’m going to do it. Even to my detriment at times.“Having been out of the game recovering from the double stress fracture and having spent a lot of time away from team-mates and staff who’d been a part of my life for as long as I could remember, I needed to feel a part of something again.

“I needed to feel like I was playing my part. I’ve read some call me selfish for holding off getting the surgery this season but it was never about putting myself first and that’s how we’ve reached this point, and something, as a 23-year-old, I’ve had to learn the hard way.“To guarantee I can play this game as long as possible, I need to listen to my body, Everyone has an opinion but no-one knows my body better than me.“It’s hard to describe the feeling of representing your country. Given the choice, no-one would ever turn that down at such a big tournament. As a little boy or girl, you dream of those moments.

“I had been deemed fit for the full season, and given my injuries were being managed, what was another couple of weeks? Managing the pain, I was training well and found a lot of comfort in the England camp after the Europa League final.“In hindsight, if I had known I wouldn’t have played a significant role in the Euros, would I have gone? Hindsight is a wonderful thing isn’t it?“Physically, my 100 per cent just wasn’t possible. I’m walking away from last season with 36 goal contributions but, more importantly, I’m walking away with lessons learnt. We live and we learn, as they say, but what is never in doubt is my commitment to the club and the national team.“It’s been a hard one but I’m coming back physically and mentally stronger. Thank you for all of the kind messages,” the England international wrote on his verified Instagram account.