Prince Harry and wife, Meghan receives charity award for their decision to have only two kids 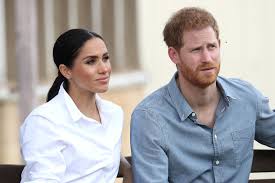 Oyogist has learned that the Prince Harry and his wife, Meghan have been awarded by a charity for making the “enlightened decision” to have only two children.

The charity organisation Identified as Population Matters gave Prince Harry and Meghan Markle the “Special Award”, stating that their decision to have only two children means that they will reduce their impact on the environment .

Harry disclosed this decision to have only two kids during a talk with chimpanzee expert, Dr Jane Goodall, for Vogue 2019, in which he described the Earth as “borrowed.”

He said: “Surely, being as intelligent as we all are, or as evolved as we all are supposed to be, we should be able to leave something better behind for the next generation.”

A spokesman for the UK-based charity said: “In choosing and publicly declaring their intention to limit their family to two, the Duke and Duchess of Sussex are helping to ensure a better future for their children and providing a role model for other families.

“Having a smaller family reduces our impact on the Earth, and provides a better chance for all our children, their children and future generations to flourish on a healthy planet.
“We commend the Duke and Duchess for taking this enlightened decision, and for affirming that a smaller family is also a happy family.
Share
0
FacebookTwitterPinterestLinkedinRedditWhatsappTelegramViberEmail