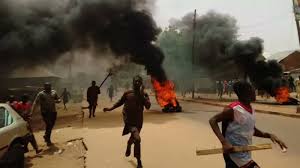 OYOGIST has learned that the Governor of Sokoto State, Aminu Tambuwal has Ordered A Curfew In a bid To Curb Further Spread Of Violence in the state.

Recall we had earlier reported that several agitated youths, protested for the release of Deborah Samuel’s murder suspects.

As at the time of filing this report, our correspondent gathered that several Causalities were recorded in the ongoing protest, also Gory images were sighted on ground.