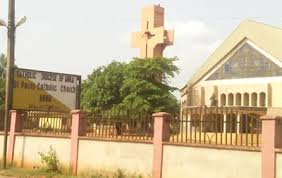 Oyogist has learned that an unidentified native doctor recently disappeared into thin air after dropping a small basket near a church in Awka, Anambra state.

The incident which happened around 1pm on Friday sparked severe outrage among residents in the community.

According to an eyewitness who confirmed the incident to Oyogist, the man who wore a white garment arrived bare footed at the church environs.

After a while, he dropped a little basket which was reportedly filled with eggs few miles away from the church before he mysteriously disappeared.