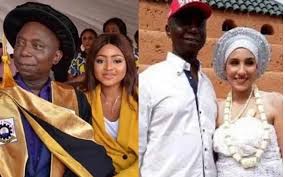 Oyogist has learned that Popular Nigerian billionaire, Ned Nwoko has allegedly paid the bride price of his new wife.

According to the IG gossip blog, Cutie__juls who shared the news, Regina’s mom, Rita has told Ned Nwoko not to flaunt his new wife on social media for the sake of her daughter’s mental health.

The report also disclosed that Ned Nwoko was spotted with his new wife at Asaba, Delta state when the Peoples Democratic Party (PDP) held a rally at Senotaph stadium.

“So Grandma Moon says Papa Moon should keep his new babe a secret from social media in-laws because of Mama Moon’s mental health.

“Papa Moon even took his new babe to Asaba when PDP held the rally at Senotaph StadiumAbeg, aproko says Grandma Moon dey vex wella for fear that Obasanjo’s internet children might make merry over this news.

“Hmmm and grandma dey para sey as Regina is preparing to take in seed for her 2nd child, this kian behaviour from Pa Ned is very disturbing.Confirming from Asaba, our new in-law is equally beautiful and fair.