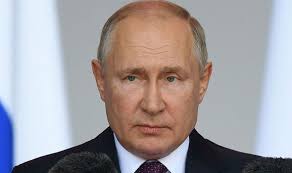 Oyogist has learned that Russian President, Vladimir Putin may be in Support of taxing and regulating crypto mining in the country, per a latest report by Bloomberg.

Recall the Bank of Russia had earlier proposed a total ban on crypto mining and trading last week.

Anonymous sources familiar with the matter Disclosed that Putin is backing a new proposal by the government that aims to regulate mining—an energy-intensive process that uses specialized computational chips to process transactions on a Proof-of-Work blockchain like Bitcoin.

The Latest report comes a day after President Putin was quoted as saying Russia had “advantages” in crypto mining.

In a government meeting, Putin commented that “we also have certain competitive advantages here, especially in the so-called mining.”

In terms of Bitcoin mining, Russia is the third-largest country based on its share of the Bitcoin hashrate, a unit of computational power on the network.